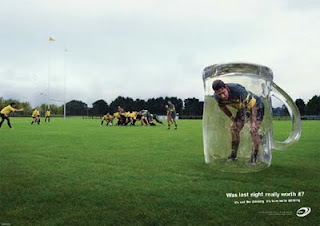 Well last night was most enjoyable. Copious amounts of alcohol twinned with exuberant dancing equals sore head this morning and a bad knee!! Still I obviously managed to persuade the Mrs to stop for a kebab on the way home as half of it seems to be down the front of my dinner jacket!

I can't believe I said I would play rugby today. I feel like crap have somehow hurt my knee and want to go back to bed please. It also means that I'm going to miss today's tennis.

It's a shame that we have Nadal v Djokovic in the semi final really, but it means it's a great opportunity for Monfils and Stepanek.

In the 1st Semi final I can't see past a Djokovic win. His game is superior to Nadal's on this surface and seems to be in fine form despite his customary wobbles in matches. Nadal was great against Tsonga yesterday but has been very average apart from that. Probably not one to get on early though as the swing will be sudden for a break either way.

In the second Semi I favour Monfils. He can blow hot and cold I know but this close to a Masters Series final should be enough to focus him especially on home soil. Stepanek has had a great run but was completely blown off the court by Murray until he stopped playing. Even if I was around I wouldn't be confident enough to have a bet on this.

In summary then perhaps missing the tennis today is not such a bad thing with two potentially tight matches. I'll just go and run around a rugby field trying not to throw up! I'm getting too old for this nonsense ;-)
Posted by My Lesson Cost 70K at 11:35 1 comment:

Profit (or loss) from Trading on Betfair